We love a good bratwurst (or ‘brat’ as they are endearingly known) but did you know there are other types of sausages available too?

In this article we’re going to take a look at the different types of sausage and how they stack up against the humble brat.

Which one of the sausages on this list is your favorite?

What Is A Bratwurst?

First things first, let’s find out more about the bratwurst.

A bratwurst is a thick, long German sausage, with a coarse and heavy inside. First made in the 14th century, the brat is typically made of pork, but can contain veal or beef too.

Bratwurst come in many different variations, with each region of Germany having its own unique recipe of herbs and spices. In fact, we’re aware of about forty different types of bratwurst!

Although bratwurst generally have a light flavor, common herbs and spices used in them include marjoram, mace, ginger and nutmeg.

Brats have a pinkish, greyish color when they are in the packet and they need to be cooked before eating, whether boiled, cooked or grilled. Try boiling them in beer before you grill them for an extra boost of flavor!

Brats taste good with just about anything, but we love them in a hard roll, topped with sauerkraut and a drizzle of mustard. They are also delicious with German potato salad or potato pancakes.

Like bratwurst, knockwurst are thick sausages that come from Germany, specifically the Northern region.

They were initially known as ‘knackwurst’. ‘Knack’ is German for ‘snap’, which is the noise the casings make when you bite into them. However, this name was changed for the American market.

How to cook knockwurst: Like brats, you can boil, cook or grill knockwurst.

Meat used: Knockwurst are generally made of beef rather than pork.

Flavoring: Knockwurst are known for being very garlicky and spicy – they have a very intense taste and smell! Paprika gives knockwurst their trademark orange tint.

Are knockwurst larger or smaller than bratwurst? They are shorter.

What to eat knockwurst with: Like bratwurst, knockwurst taste great with sauerkraut, which is a fermented cabbage dish. Alternatively, knockwurst are also great with potatoes and fried onions.

Kielbasa is a Polish sausage. Fun fact: ‘Kielbasa’ is actually the Polish word for sausage!

How to cook kielbasa: Kielbasa can come precooked (‘smoked’) or uncooked (‘white’). If uncooked, you can boil, grill, fry or bake them.

Meat used: Kielbasa are normally made of pork, or a combination of beef and pork. You can sometimes find turkey and chicken ones too.

Flavoring: Like knockwurst, kielbasa are very garlicky. They also contain cloves and pimentos for a spicy kick.

Are kielbasa larger or smaller than bratwurst? Larger – kielbasa comes as a large U-shaped sausage.

What to eat kielbasa with: Kielbasa sausage is excellent on a breakfast platter with eggs, hash browns and bacon. This sausage is also good fried with potatoes, onions and peppers.

Hot dogs are best known for being served at baseball stadiums and cookouts all across America! Hot dogs have a very smooth consistency, as the meat is blended into a paste before adding to the casing.

How to cook hot dogs: Hot dogs generally come precooked, although they taste best if you warm them up before serving.

Meat used: Hot dogs can be made of pork, beef or chicken, or a combination of the three.

Flavouring: Hot dogs have a very mild and meaty flavour. The taste depends on the meat that is used.

Are hot dogs larger or smaller than bratwurst? They are longer and thinner

Also known as Vienna sausage or franks, frankfurters have a similar consistency to hot dogs, but they are generally longer and thicker.

Meat used: Frankfurters are usually made of a combination of beef and pork.

Flavoring: Like hot dogs, frankfurters are meaty and mild.

Are frankfurters larger or smaller than bratwurst? They are larger.

What to eat frankfurters with: Try in a toasted bun or spice up your mac and cheese by adding slices of frankfurter!

Mettwurst (also known as ‘metts’) is a spreadable meat that comes in a sausage casing.

How to cook mettwurst: Mettwurst doesn’t need cooking and can be eaten straight out of the casing. However, cooking this sausage gives it a lovely golden brown color and crunch.

Meat used: Mettwurst is made of cured and smoked pork.

Flavoring: Mettwurst is very strong in flavor, seasoned with intense spices like pepper and coriander.

Are mettwurst larger or smaller than bratwurst? They are smaller and shorter.

What to eat mettwurst with: Try this spreadable sausage on bread or crackers. It’s also good served with kale and cabbage.

Bockwurst is another German sausage. Unlike brats though, bockwurst have a smooth texture.

How to cook bockwurst: Bockwurst have a white coloring to them. To keep this pristine pale color, it is recommended that bockwurst are boiled or poached rather than grilled.

Meat used: Bockwurst sausages are made from veal or pork.

Flavoring: Bockwurst are more zesty than brats are, using herbs and seasonings like lemon zest, green onions and parsley.

Are bockwurst larger or smaller than bratwurst? They are smaller.

What to eat bockwurst with: Bockwurst sausages are usually served in a bread roll with spicy mustard. Bockwurst are also traditionally served in Germany with potato salad or potato soup.

Italian sausage is a style of pork sausage with a coarse texture.

Meat used: Italian sausage is made of pork.

Flavoring: Italian sausage is seasoned with garlic, anise and fennel. Spicier variants that contain chili are also available too. Like bratwurst, different variants of this sausage come from various regions of Italy.

In Summary – Which Sausage Is The Best?

Although we’re massive fans of bratwurst, we wouldn’t say no to any of the delicious sausages on this list!

Ultimately the one you choose will be down to your own personal preference.

Which is your favorite sausage? Let us know in the comments! 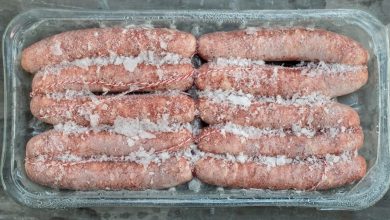 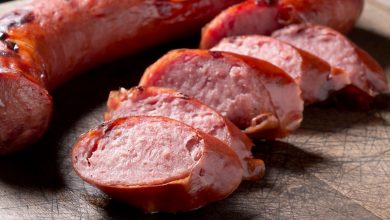 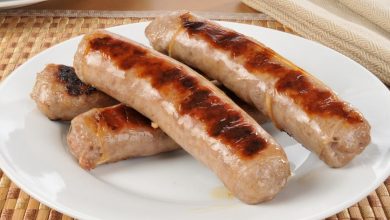