When you’re cooking bacon, depending on the quality and fat content, it’s bound to give off a fair amount of bacon grease that you can save and use later for other things.

However, you’ll need to be careful with the temperature of the storage and the storage container to ensure your bacon grease lasts for a longer period.

Although bacon grease, like other fats, is a long-lasting product, it can go bad quickly if not stored correctly.

So, How Long Does Bacon Grease Last?

The amount of time that bacon grease lasts is wholly dependent on the correct collection of the grease initially and the storage type.

Bacon grease technically doesn’t spoil at all, as fats, left totally alone will remain usable indefinitely. However, introduction to oxygen will cause fat oxidation which starts to rot the fat when it’s exposed to the outside air.

For this reason, it’s always best to store your bacon fat in an environment where oxygen or changes in temperature don’t affect the grease.

The Best Ways To Store Bacon Grease For Longevity

Bacon grease can be bought at the store if you really prefer it over butter or oil when cooking. However, it’s much cheaper to make your own at home when you cook bacon.

To store your homemade grease, you should have a sealed container ready when you’re cooking off your bacon.

This could be a sealable plastic tub or glass jar, or you could even use vacuum-packed food bags if that makes it easier to store.

Once you’ve cooked your bacon, you’ll want to allow the fat to cool very slightly so that it’s safe to transfer to your container, but don’t let it go cold, otherwise, it’ll solidify and will be difficult to move without the use of utensils.

The grease should be a thick liquid, so you can pour it gradually into whatever container you have prepared.

The fat will solidify as it cools and you’ll end up with a spreadable, butter-like consistency that can easily be used for cooking as it’ll melt back in the pan.

But, then, where should you put the container?

If you store the container of grease in a pantry or cupboard away from sunlight, it can last up to 6 months. If it’s homemade, you should throw away the bacon grease after this timeframe and make it fresh.

However, store-bought bacon grease can last for much longer as long as the container hasn’t been opened. You’ll need to go by the best before date.

Storing your bacon grease at a cooler temperature in the fridge will keep it for much longer. This is because mold and bacteria can’t grow as quickly in cold temperatures.

You shouldn’t store bacon grease on the counter. It could be exposed to direct sunlight and this will encourage faster bacteria growth.

Storing bacon grease in the freezer will mean it will last for years as bacteria can’t grow in low temperatures. However, you will need to make sure the grease is fully defrosted in the fridge overnight before use.

Homemade bacon grease doesn’t last quite as long as store-bought.

This is because homemade isn’t thoroughly cleaned before being stored and may still contain bacon remnants which are more prone to mold and will grow bacteria more quickly.

Homemade bacon grease doesn’t go through a thorough cleaning process, so it can actually add salty flavor to any savory dishes, depending on how well you drain it before storage.

If you’re cooking onions or root vegetables for gravy, the grease will add that little extra to your dish.

Store-bought bacon grease doesn’t usually harbor the pure taste of bacon, as the cleaning process removes any remaining bacon pieces, so it’s better for baking or other non-savory cooking.

Home-making your bacon grease is pretty much free. You just save the grease from the bacon you’ve cooked, so it’s the most cost-effective option.

However, based on how much bacon you cook, it could take you much longer to accumulate the amount of grease that you’re likely to use.

Store-bought bacon grease is more expensive as you’ll need to buy a tub. However, for the amount of time that it’ll last you and the money it’ll save you on bacon purchases, you might find that it’s worth the extra cost.

Can You Freeze Bacon Grease?

While bacon grease copes well in the freezer and lasts for ages, you need to prepare it for use ahead of time.

You also won’t be able to refreeze the grease once it’s defrosted as it affects the structure of the grease and makes it more liquid. It also accelerates the deterioration of the grease.

If you want to freeze your bacon grease, it’s a good idea to freeze it in separate containers large enough for use, or even ice cube trays. That way, you can get a small portion out of the freezer for use, without wasting the whole lot.

How To Identify If Bacon Grease Has Gone Bad

Bacon grease lasts for a long time, but it can go bad if you haven’t stored it properly or if you leave it in an opened container.

Using bacon grease that’s gone bad can cause issues when cooking food as it will affect the taste. It could also be bad for your health as really old bacon grease can cause food poisoning if it’s filled with bad bacteria.

There are a few ways to tell if your bacon grease has gone bad that you’ll need to look out for.

Hopefully, you’d be able to tell if the bacon grease is bad from the color. Really old grease could be covered in a layer of mold, giving it a brown or black tint or spotty appearance.

However, the color change of bad grease may not be as noticeable as this. You may also see a blue or grey color starting to appear in certain sections of the grease, this also means that it’s gone bad.

When fresh, bacon grease should have a smooth, dry surface. If you open the container and notice liquid on the top, then it’s a sign that you should throw the grease away.

Any changes in taste such as bitterness or excessively strong meaty flavor may be a sign that your grease has gone off.

If you notice the smell turning sour or a fishy odor coming through, this is a sign that the oxidation is making the grease rancid.

Storing your own bacon grease seems easy enough, but there are a few tips and tricks that can help you make your bacon grease last longer and taste a little better so you can make the most of it.

Before you put your grease into your storage container, make sure you strain it through a sieve. This means that you have no lasting pieces of bacon in there which can affect the shelf life.

This means you can use sections of grease by themselves without disrupting a larger pot. This will preserve the grease for much longer because it’ll be exposed to less air.

Last but not least, you should always ensure your grease is packaged in an airtight container to preserve it for longer. Any cracks or holes will allow air to get in and will limit the shelf life. 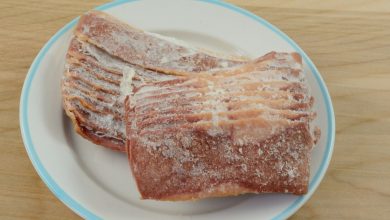 How To Thaw Bacon: 5 Easy Ways & Step By Step Instructions 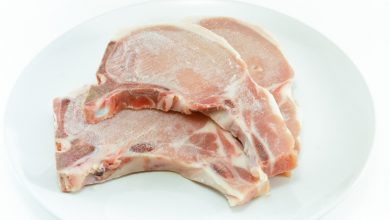